Camille Patha is a pioneer Pacific Northwest Surrealist artist who is reconceived as a proto-feminist and modernist painter in this path-breaking monograph by distinguished art critic Matthew Kangas. Camille Patha: Geography of Desire chronicles the 40-year journey of a woman who addressed significant art trends of the 1960s and 1970s such as hard-edge abstraction and symbolic gender, transforming them into her own personal vocabulary of shapes and images–mysterious, delightful and beautiful.

Born in Seattle in 1938, Camille Patha creates an art of illusion, personal evolution, social commitment and material exploration that ranges from hallucinatory landscapes, sexual symbolism, ecological tableaux and, in her most recent work, gestural responses to the environment that celebrate the pure materiality of paint.

Working continuously since her 1965 graduation from the University of Washington Graduate School of Art, Patha has exhibited widely in galleries and museums, often challenging existing orthodoxies of style and content with her deeply personal vision. Too young to be an Abstract Expressionist, she later adapted her own brushwork to an array of dynamic, colorful canvases; too young to be a Surrealist, she developed out of an American variant, West Coast Surrealism, that became the vehicle for her concerns with suburban sprawl, endangered species and, overlooked until recently, sexual imagery that Kangas calls “proto-feminist.”

Legendary giant of American feminist art, Judy Chicago, agrees. Her Foreword recalls the artist’s 1974 encounter with Patha, Chicago’s own responses to the art of the period, and her acknowledgement that Patha “should be congratulated for having [prevailed]” against the “privileging of men’s aesthetic expressions.” Chicago adds that “Camille and I seemed to be among the few who were determined that our art school education would not lead to a dead end… Though she was in Seattle and I was in Los Angeles, we seem to have faced many of the same challenges.”

Kangas examines the exciting developments of Patha’s art in depth: her successful entries into male-juried exhibitions using initials rather than her first name; her transition to a long series of successful and critically acclaimed gallery and museum exhibition; and her recent return to modernist abstraction, bringing to it her ambitions of scale, expansive painterly attack, and a reconsidered philosophy of color and form.

As Chicago and Kangas demonstrate, the journey within a room of one’s own–Patha’s studio in Normandy Park, Washington– did not occur as a result of feminist ideology, intellectual coercion or educational conditioning. Rather, it is the operation of the artist’s mind on a deeply intuitive level as well as an analytical one. Both have fused deceptively playful scenes with ominously darker visions of confinement, uncertainty and, ultimately, purely sensuous optical celebration. 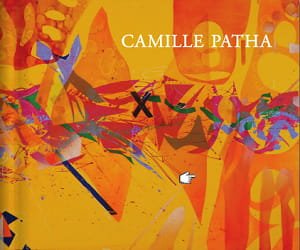 A Punch of Color: Fifty Years of Painting by Camille Patha 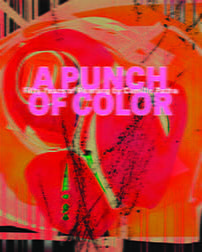